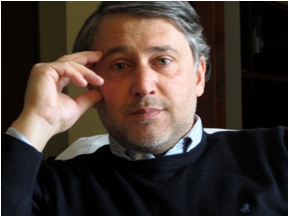 In 1987 he graduated as a pianist with full marks and honours at the Liceo Musicale “Vincenzo Bellini” in Caltanissetta and then he improved his studies, for several years, under the guide of the Mo A.Trombone.
He performed in various Italian cities (Rome, Palombara Sabina, Catania, Palermo,etc) as soloist, soloist with orchestra and in chamber formations, for associations, public institutions and he has always received unanimuos appreciations.
In 1995 he founded the Polyphonic Choir “Don Bosco” of which he is the director and with which he has hold concerts all over Sicily and also in Rome, Florence, Siena, Civitavecchia, Ascoli Piceno, Perugia, Gubbio, Amantea, Novara and Naples.
He also registered a CD live and performed the complete version of the “Gloria” by A.Vivaldi.
He is the director of the choir of female voices “Resonantie Camera Chorus”, with which he studies the compositions of contemporary authors and with which he perfoms an intense concert activity.
He was the director a white voices choir “Fantasti..Canto” in San Cataldo with which he won absolute first prizes in National competitions.
He is the founder and director of the string chamber orchestra “Armonikè” with which he performed several and appreciated concerts.
He has had a lot of pubblications for piano and he is the author of several elaborations for choir and mixed voices.
He has been teacher of piano since 1987 and currently he is principal teacher of piano at the ISSM “V.Bellini” in Caltanissetta, Institution AFAM. He was part of the Accademic Council and the coordinator of accademic courses of first and second level in the same institute.
Now he is head of department of keyboard and percussion instruments.
He is Deputy Director with a delegate to the teaching in the same institute and he is also member of the Board of Directors.