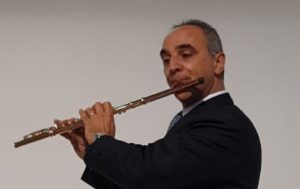 Salvatore Vella graduated with honors in 1985 under the guidance of Maestro Gerardo Petruzziello at the “V. Bellini ”of Palermo. He then perfected with Masters such as W. Schulz in Vienna, A. Persichilli at the National Academy of “S. Cecilia “of Rome of which he then becomes the assistant, E. Pahud at the Amici della Musica of Florence and with A. Marion at the courses of the Gubbio Festival. In 1984 he was a member of the 1st flute of the Orchestra des Jeunes de la Mediterranée and was chosen to be part of the Orchestra of the Italian Conservatories of Music and the European Community Youth Orchestra “E.C.Y.O. 1984 ”directed by Maestro Abbado. In 1985 he won the Ottavino National Competition at the Orchestra of the Opera Theater of Genoa with which he collaborated for about a year and of Primo Flute at the National Band of the Guardia di Finanza where he remained for almost three years performing concerts from soloist and numerous recordings for RCA and RAI recordings, in the same year he was a finalist at the Ottavino International Competition at the Teatro alla Scala Orchestra, with whom he then collaborated under the guidance of Maestro Muti. As Primo Flute he collaborated with the Orchestra of the Accademia Nazionale di S. Cecilia conducted by M ° Chung with whom he participated in recordings for the Deutsche Grammophon and Musicom, the Orchestra of the Teatro dell’Opera di Roma and the Orchestra of the Maggio Musicale Fiorentino conducted by Maestro Muti in Bosnia and for the Ravenna Festival. He is the winner of prize competitions including the “Boario Musica ’94” and the “Briccialdi ’95 and ’96. He carries out an intense chamber music activity with the Bellinian wind quintet and with the Bellinian ensemble with which he has performed concerts throughout Italy and tours abroad (Lithuania, Turkey, Malta, Brazil, Japan, Indonesia, Argentina, France, Spain ). He is also dedicated to teaching as a flute teacher at the V. Bellini Institute of Musical Studies in Caltanissetta (CL) and is often invited to hold master classes and master classes in Italy and Japan, at the Pearl atelier. Flute and the Shobi Academy in Tokyo on behalf of Pearl Flute Japan of which he has been a testimonial since 2001, he was recently invited to hold a concert and a masterclass at the Ouest University of London College of Music and Media. Since 1989 he has been first flute soloist of the Bellini Theater Orchestra of Catania.