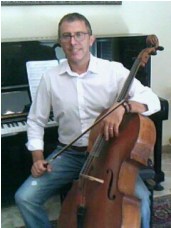 He began studying the cello under the guidance of M° Luigi Fratti, then continued with other teachers, including M° Giovanni Perriera, and obtained the Cello diploma at the ”Vincenzo Bellini” Musical Institute in Caltanissetta.
He has perfected himself with illustrious Masters, including A. Baldwin for the cello, G. Caramia, G. Prencipe, C. Pozzi, G. Monch, A. Vismara for chamber music.
Winner of several auditions, he has collaborated with the orchestra of the Teatro Massimo in Palermo, the Sicilian Symphony Orchestra, the Vicenza Orchestra and with the Ente Luglio Trapanese; he was an influential member of the Sicilian Youth Orchestra (Ars Nova) and the Italian Youth Orchestra.
He has performed with different groups and chamber orchestras as a sidekick and soloist, playing in several Italian and foreign cities (Palermo, Catania, Enna, Perugia, Vinci “FI”, Brescia, Cremona, Strasbourg).