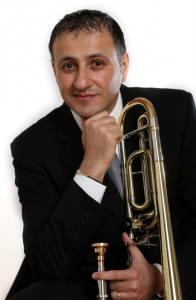 International Soloist, Vincenzo Paratore is currently considered one of the most talented of the new generation Trombonists on the world stage. Graduate of the Music Institute “V. Bellini” of Catania in Italy. He continued his studies at the National Conservatory of Paris obtaining the Premierè Prix unanimously as well as the National Academy of Santa Cecilia in Rome.
The musical maturity and technical-instrumental mastery make Vincenzo Paratore a Trombonist of High Professional Level and a multipurpose musician, so he is the winner of Auditions, National and International Competitions .
He was the first Italian Trombonist to win the 2nd International Music Competition for Young Performers “City of Chieri” (2002), the 18th International Trombone Competition “Città di Porcia” (2007) and the “5th International Trombone Competition of Jeju” (2008 Korea).
It has long played numerous concerts in Italy and abroad, performing as a soloist and with various formations. Is part of the ” Quintetto di
Ottoni Siciliano”, with whom he recorded two albums, and the Trombones Quartet “Sciara Quartet” training won several national competitions. He also recorded a concert Soloist in the disc “A Bridge for Brazil”.
Key figure in the Italian Trombone collaborated with the Teatro Regio in Turin, with the Orchestra Sinfonica Siciliana, Teatro alla Scala, La Scala Philharmonic and Orchestra of Santa Cecilia of Rome .
Since 2003 he serves as Principal Trombone in the Orchestra of the Teatro Massimo “Vincenzo Bellini “in Catania with which he toured in Japan, Russia, Spain, China .
He is regularly invited as teacher and soloist to the most prestigious International Brass Festivals .
To the intense concert activity alongside that didactic. He is teacher of Trombone at the V. Bellini Music Institute in Caltanissetta and holds many courses and masterclasses in Italy, Switzerland, Germany, France, Mexico, Hungary, Korea, Spain, Colombia, Malta .