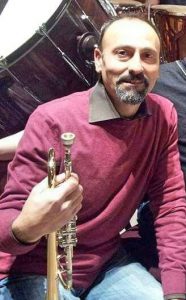 Vincenzo Buscemi was born in San Vito Lo Capo on the 2 March 1969, has had the first approach with the music just for fun, at the age of nine years, attending, at first, a musical training course organized by the City of San Vito Lo Capo then continued his musical studies at the Conservatory of Music “Vincenzo Bellini” of Palermo, graduating in trumpet at 17 years old, with 10.9 rating. Immediately began his musical career playing solo and with various music organizations and with numerous orchestras. The most famous is the one who still continues to lend his talent, resulting in hearing Winner Orchestra at the Fondazione Teatro Massimo of Palermo. Of no less prestige his musical performance: the Chamber Orchestra of Sicily, the Rover Group Theatre, The Production of Aldo Morgante, the Octet Stravinsky at the company Radio Television CRT, the Youth Symphony Orchestra of the Conservatory of Music V. Bellini in Palermo, the Classic Brass Quintet, the Orchestra Ente Luglio Musicale Trapanese, etc. But we must not forget his temporary presence in the country music band since childhood as a simple musician then in 1987 becoming director of the same teacher, role played to date. While devoting most of his time to the improvement and perfection of this small “orchestra”, he took part in several master classes in several Italian cities: Lanciano, Fiesole, etc .., reaching the final of the competition for the European Youth Orchestra . He undertook in 1992 as a teacher of Trumpet and Trombone Musical Institute Vincenzo Bellini of Caltanissetta, until today