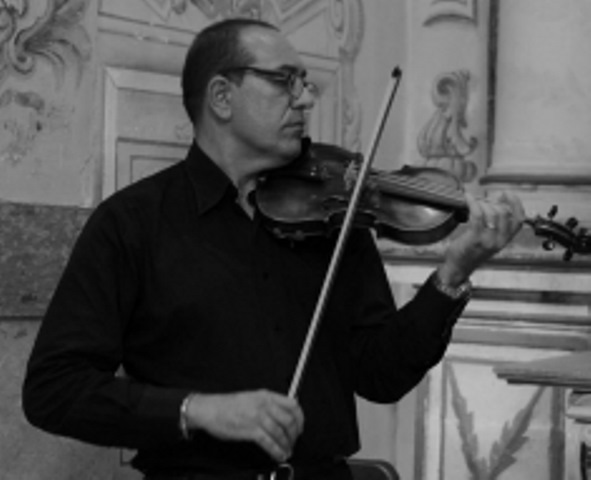 Has started the violin study under the guide of the maestro Ermanno Barbieri at “Istituto Musicale V. Bellini” in Caltanissetta, obtaining his certificate with the best marks. He improved himself under the guide of the famous didactic maestro George  Mönch, of whom he has been an assistant too. Winner of several auditions he has made an intense artistic activity even collaborating, from 1990 to 1995 with the Orchestra of  the “Teatro Massimo V. Bellini” in Catania and the “Orchestra Sinfonica Siciliana.”

He has been performing since 1988 with several groups and chamber orchestras, as soloist and as stooge, in different Italian and foreign cities (Palermo, Enna, Catania, Vinci (Fi), Perugia, Strasburgo, Eindhoven, etc.), playing with musicians such as Vismara, Vernikov, Mönch, and so on.  Even his activity  on duets with piano has been particularly intense, performing for several boards and associations in the whole Italy (Amici della Musica, Agimus, the music associations “F. Chopin”, “il Ponte”, “Anemos”,  the “festival borghi e valli” di Pavia, concert seasons in several Italian provinces and towns, etc.).

Winner of the competition for titles and examinations, he has obtained the violin role chair at the “Istituto Musicale V.Bellini” in Caltanissetta. Plenty of his students have won the best prizes and absolute best prize in several national and international competitions.