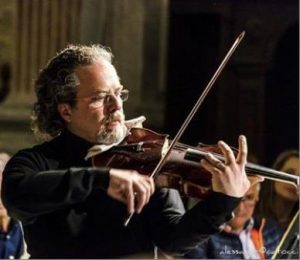 Born in Naples, a pupil of Maestro Giusto Cappone (I viola of the Berlin Philharmonic), he graduated with viola, studied conducting with Maestro Massimo Pradella.Researcher and scholar of violin making in 2004 he published “THE SECRET” for which A.L.I. (Ass. Italian Luthiers) appoints him Honorary Member, and expert for string instruments for the EUROPEAN UNION esp D’Arte.He has played numerous concerts in various formations.He has collaborated with the Bellini Theater of Catania, the Municipal Theater of Florence, the Opera of Rome, the Bologna Chamber Orchestra, the Roman Theater of Fiesole, the Bellini Theater of Naples, Rendano of Cosenza, Archi di Roma RAI of Naples / Rome, the concerts of Radio Uno Rai and Cologne Chamber Orchestra performing solo in Italy and abroad.Since 2005 he has dedicated himself to chamber music performing in a duo with Bruno Canino and together in 2006 they made the CD for ARMELIN DI PADOVA and AVM CLASSIC‘’ THE AWAKENING OF THE SOUL ’’ from that moment devotes his life to the dissemination and culture of the ‘Viola’ n2012 Anlai AwardThe meeting in Zurich with M ° Rostropocich who comments … true Italian sound … has positively marked the musical journey … has played with:AWeissenberg, Montserat, Caballé, P.Amoyal, A.Lombard.B.Bartoletti, C.Rossi.M.Melato.E.Jannacci ….He believes in new musical language, captivating, capable of involving and to excite he audience, for this he composed three pieces for solo viola of which “Prayer” with seven bells (rang by the audience), “Playful” for viola and triangle, “Search”, Choral for viola and choir with closed mouth, Canon for tere violas, Four pieces for viola solo edited by Armelin.
In 2008 Armelin AVM Classic proposes the recording of the Concert of:
C. Orsi, First world performance First world recording
A.Rolla Rondò First world performance First world recording
Weber Theme and virtuosic variations First world recording, accompanied by the orchestra “The Philharmonic of Rome” with the patronage of Maestro U. Ughi.
In 2009 he recorded: “Sonatas for Viola and Harpsichord”World premiere World premiere recording ‘under the patronage of the American University of Baroke’, Bramhs’ sextets with two violas, the ” Romanza di Bruch ” for viola and orchestra, the ” Fantasia di Hummell”with the OGI “V. Bellini “and a selected production a real tribute to the Viola” Saluto d’Amore “, avm classic gives him the prestigious” International Gold Recording “delivered to him in Naples on the occasionWorld First Execution World First Registration (January 2014) of the conc:C.F Bach for viola, piano and orchestra – Canino – Traverso – Grima Orch “Discantus”He teaches Viola at Bellini in Caltanissetta.