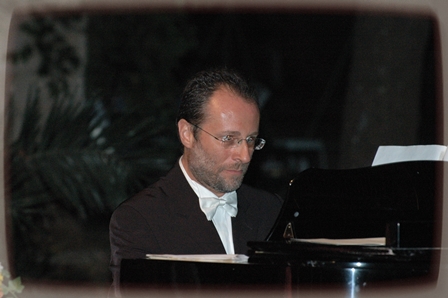 Enrico Maida studied piano under Raffaele Vinci at an earlier stage, with Gaetano Cellizza later at ‘Vincenzo Bellini’  Academy of Music in Palermo,  where he took his degree with the highest marks. In 1987 he attended  a seminar on musical analysis and interpretation, given by Eliodoro Sollima in Caltanissetta.
In 1988 he attended the second international seminar on musical interpretation given by Sergio Fiorentino in Ischia and, in 1991 and 1992, two specialization courses given by Polish pianist and composer Piotr Lachert, in which he distinguished himself  also performing brilliantly in the final concert.
He plays and performs both as a soloist, as a duo together with soprano Maria Grazia Bonelli, and in ensembles  and orchestras.
He is also a teacher: he has  been teaching classical piano at ‘Vincenzo Bellini’ Music School in Caltanissetta since 1982. He also teaches  ‘Orchestra Laboratory’  for Piano and Orchestra ( two-year master course – interpretation/ composition), in addition to ‘Piano improvisation’ and ‘performing practice’ ( three-year academic course).
Most of his students have distinguished themselves both as pianists and composers in competitions. Enrico is also a judge in national and international competitions.
He has always had a special aptitude for jazz, to which he has been getting closer and closer in the last few years, performing both in duos, trios and quartets with jazz musicians such as Maurizio Giammarco, Jacopo Albini, Vincenzo Baldessarro, Giovanni Urbano.
He attended several masters (with Kenny Werner , David Kikosky, Jason Lindner) and took part in jazz festivals such as 6th Summer Jazz Festival ( Castellammare del Golfo, 2012), Mediterranean Sound Festival (Trapani, 2012), Focus Jazz and Movie Music (Trapani, 2012), Jazz Master Class with double bass player Manfred Brundl (Trapani, 2013), 9th RodiJazzFest (Rodi Garganico,2013), where he attended  master classes with Fabrizio Bosso, Giuseppe Spagnoli and Enzo Nini, Messina Sea Jazz Festival 2014, where he attended master classes with Maurizio Giammarco, Franco Cerri, Enrico Intra, Marcello Pellitteri, and performed brilliantly in the final concert.
He has recently taken  a Master’s Jazz degree at ‘A.Scontrino’ Academy of Music in Trapani, under the guidance of Salvatore Bonafede and Lauro Rossi, with a score of 110/110 and distinction.
He is currently improving with jazz player, composer and arranger Giovanni Mazzarino, performing in various ensembles (such as the recent ‘Bebop Jazz trio’ or  the “Enrico Maida quartet” or the “E.M. and the Jazz Farm”).