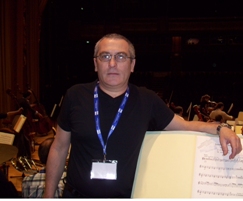 Claudio Scolari took a diploma at the College of music A.Boito in Parma with professor Stefano Cantarelli, his artistic carreer developed in two different areas: the Classical and Contemporary music one and the Avantguard Jazz music one in collaboration with some of the most prestigious sinphonic orchestras in Italy e.g.The Scala Philarmonic Orchestra of Milano,The RAI National Simphonic Orchestra of Turin going on tour in Spain, Switzerland and Germany from 1989 to 2009 and collaborating with the following Orchestra Directors: Giuseppe Sinopoli, Luciano Berio, Fruhbech de Burgos,Whun Chung, Eliahu Imbal, Jeffrey Tate, Yutaka Sado, Georges Pretre, Daniel Oren, Aleksandr Lazarev, Dmitrij Kitaenko, Gianandrea Noseda, Kristian Jarvi, Gyorgy Gyorivanyi Rath, Lu Jia, Yuri Ahronovitch, Riccardo Chally, Ingo Metzmacher, Michel Plasson, Gennadij Rozdestvenskij, Garcia Navarro, James judd, Gianluigi Gelmetti, Sylvain Cambreling, Daniele Callegari, Yan Pascal Tortelier, Gary Bertini, Emmanuel Krivine, Zoltàn Pesko, Daniele Gatti, Kazushi Ono, Vladimir Delman, Josè Serebrier, Ion Marin, Isaac Karabtchevsky.The Simphonic Orchestra of theater La Fenice of Venice, the Simphonic Orchestra of theater Della Rena of Verona, Simphonic Orchestra Arturo Toscanini of Parma, the Simphonic Orchestra of the Italian-Swiss Radio, the Philarmonic Orchestra of Parma.He also partecipated to the concert held in Rome in honour of Pope John Paul The Second. He partecipated to the concert to celebrate Luciano Pavarotti’s birthday held in Montecarlo. He partecipated to the Pavarotti & Friends editions of 1999 – 2000 – 2002 and 2003, where he met the American drums player STEVE GADD.He played at the “Biennale di Venezia” with the American drums player Chad Wackerman executing a composition by Frank Zappa. In contemporary music he took part in the following ensembles: CARME (Italian Society of Chamber Music) “Gruppo Musica Insieme di Cremona”, I Virtuosi Italiani, Ensemble Edgard Varèse. For RAI has recorded two CD with the percussions band titled THE CONCERTS OF POLITECHNIC and PERCUSSION & FRIENDS. He was member of the Jazz band Euforia partecipating to the Jazz Festival of Modena, concert which gained several consenses by Italian press, journals such as Repubblica underlined the quality and originality of the pieces of the band. Bologna Biennale Young Artists two concerts set up at Palazzo Re Renzo 1988 show appreciated also by the international press. In Jazz and Avantguard music Claudio Scolari has always shown interest towards the timbric research of his instruments going also through the composition with special attention to the contemporary and jazz writing tecniques. In his way of organizing the sound elements the intent of adventuring in antique sonorities can be read, there the rithm mixes to noise and to instrumental timbers with the contemporary support of keyboards and syntetizers.
From this research the CD LANDSKAP was born and gained many written appreciations from international musicians such as John Surman and Eberhard Weber and judjements by important international journalists such as Lee Prossen of Jazz Review magazine.In 2004 the first solo CD by Claudio Scolari titled REFLEX was edited with musics written and played by himself, this album has received many critics at an international level, magazines such as Jazz Italia – Jazz About – Jazz Review – Jazz Magazine – Drum Magazine Anima jazz ecc have written articles judging this CD at a very hig musical and executional level.In 2005 has recorded the last CD by Claudio Scolari titled THE MY FOURTEEN SONGS musics written and executed iterely by him with the collaboration of Donnie Romano on guitar. In 2007 has recorded the last CD by Claudio Scolari titled DREAMS AND EMOTIONS OF CITY musics written and executed iterely by him with the collaboration of Donnie Romano on guitar and Simone Scolari on Trumpet.Claudio Scolari thought Instruments and Percussions at the School of Music of Ferrara in the academic year 2004/2005 is currently professor of percussion instruments at the Musical Institute “V. Bellini” of Caltanissetta.
Claudio  Scolari has always been focused on the study of timbre with regard to his instruments, paying particular attention to the compositional aspect and to the writing techniques of contemporary jazz, jazz rock and electronic music. His way of organising sound elements shows a clear intention to delve into ancient sonority in which rhythm mingles with instrumental noise and timbre, supported by modern keyboards and sequencers.