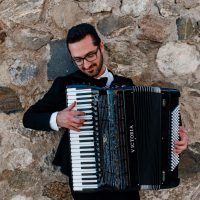 Natalino Scaffidi was born in Rome on october 25th 1983. From the age of six shows great interest in music, taking piano lessons and violin.
Soon develops a real passion for the accordion to such an extent that academic studies.He obtains at the “A. Corelli ”of Messina, under the artistic guidance of Maestro Salvatore Crisafulli, the Diploma in accordion and, subsequently, the two-year specialist course in accordion, interpretative-compositional address, both with flying makers.
In addition to academic studies, he participates in numerous high masterclasses internationally renowned teachers including Grayson Masefield (New Zealand), Alexander Rustevich (Ukraine), Gorka Hermosa (Spain), Francesco Palazzo (Italy), Vojn Vasovich (Serbia), Salvatore Crisafulli (Italy), Alexander Selivanov (Russia), Eugenia Cherkazova (Ukraine).
In years he embarks on an intense solo concert activity and in training with which he performs in Italy, Germany and Switzerland, playing for various music associations and public bodies: Ass. “Theatre of the Two Seas” by Messina, Musikè Study Center, Greek Theatre of Tindari, Greek Theatre of Taormina, regional project “Sea Events”, “A. Corelli” conservatory in Messina, conservatory “V. Bellini” by Caltanissetta, Department of Cultures University of Palermo, Ass. Ruvo’s Yellow Land of Puglia, Ass. San Martino Onlus Bologna, Ass. Rotary club, Lion club, Ass. C.R.A.L.S, La Feltrinelli, Music editions Barvin, Rome, Ass. “A. Rocca” etc.
He also participated in the television broadcast “Second Summer Evening”, aired on Rai Due, and on the television program “One Morning- Beautiful Life”, airing on Rai Uno.
He is active in the field of teaching, in fact is teacher in accordion at L’ISSM “V. Bellini” by Caltanissetta.
Previously taught accordion at the E. Majorana Music School in Agrigento and “M. Buonarroti” in Palermo. He was a teacher in Accordion in pre-academic courses at the Academy Music Art, school agreement with the “A. Corelli” Conservatory in Messina.
As numerous musical educational projects in different schools in the Messina province, near the I.C. of Tortorici, the I. C. of St. Piero Patti and the I. C. ” V. Bellini” by Patti.
He has been a lecturer in the European Project “Leonardo Da Win mobility programme” for students of the Pastwowe Policealne Studium Zawodowe Wokalno-Baletowe (Poland).
On 18 December 1999, he was awarded a important recognition from the “Centre UNESCO Youth Sicilian” for merit in art and culture.
Publish for Berben editions S.R.L. of Ancona and for the Barvin music editions of Rome, both engravings both revisions and transcriptions for loose bass accordion, from the Baroque repertoire.
Some years he collaborates in the organization of an international accordion competition classic and varietè, in Calabria, near the city of Palmi.
Currently is engaged in an artistic project called “Harmonic Reeds”, a duo of accordions and a working group for the development of the repertoire and the dissemination of the classical accordion, in collaboration with M. Rocco Cannizzaro.